By phoebe marie - November 28, 2011
Today I've had more problems with my chemo appointment than before. My white blood cell count was ALMOST too low to do the treatment. But I prevailed!
Then, the volunteers who make all of the chemo patients lunch, microwaved some sort of Lean Cuisine lasagna and the smell... oh my god, the SMELL! I was completely nauseated. Needed to cover my face with a blanket and still couldn't deal with it. One nurse gave me a napkin w lavender on it and another gave me an alcohol swab to sniff. Being the weirdo that I am, I preferred the alcohol swab.
When all of the stinky nonsense ended, I was told my blood pressure was too low for the Lasix (the drug that makes me pee a lot). And THEN I was having a weird sensitivity in my arm to the speed of the hydration drip, so they had to slow that down, which meant that I'd end up missing my radiation appointment if I had to wait til the end.
So THAT meant that I got to go down to radiation with my buddy the IV pole.
The awesome part is, however, that after that I am officially beyond the halfway point of radiation now!
Hoping that with so much gone awry DURING chemo this time, maybe all the bad energy will be used up and I won't feel like crap the next couple days!
In other news, my parents seem to be having an awful lot of conversations about moving back to Ohio. Which sounds like an excellent plan to me. :)
Xxo, Phoebe 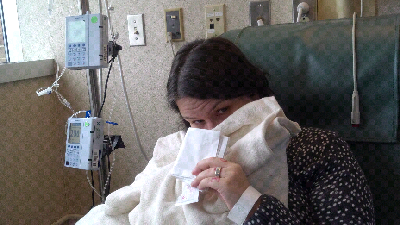 Mum said…
As one kind chemo nurse blatantly commented: Why in the hell would they put a kitchen and microwave in the middle of a chemotherapy room where every chemo patient is sensitive to smells?
November 29, 2011 at 8:45 PM