Sometimes I Have No Idea What To Say.

By phoebe marie - January 31, 2012
Like yesterday, for example.  When my mum emailed to tell me that my (knitting) dad had an unexpected procedure done...

I think I've mentioned before that knitting dad is a cancer survivor himself.  6 years ago, he beat bladder cancer.  But way before that... back when I was still in college, he had skin cancer in his lower lip.  I never told them at the time, but I was so terrified about whether he'd be ok, I dropped out of school for a semester.  I just could not cope with all of my feelings surrounding my dad's mortality.  It scared the crap out of me.

Fast forward to yesterday - over a decade later.  While my dad was here taking care of MY cancery ass, he "burned his lip."  Or so he believed.  Or wanted to believe.  But I guess when the spot from this didn't go away, even now that they've been back home for a couple weeks, it was time to hit the doctor's office.  In the email I got from him, he just said that the doc "took one look at it and began the procedure."  Ugh.  Now, I guess the hope is that what the doctor did yesterday is all that is needed.  (Praying this is true.)  Last time, he had to have something done called Mohs Procedure.  Feel free to read about that little nightmare at the link.  Or not.  Suffice it to say that I remember the day with painful clarity (though not nearly as painful as HE must, I am sure...) and I was mortified.  He was in so much pain and I felt so helpless.  Seeing your parent in pain SUCKS!

All I could think to say was to be positive.  I know that trying to stay positive, for me, was part of my cure.  It wasn't always easy - especially during the worst days of the radiation burns... But I never lost faith in the fact that I was going to be ok.  And I hope he won't, either.  Everyone here's love and support help me immeasurably, too... so if you have any words of support for my (knitting) dad... feel free to leave a comment.

I know he'll be ok, though.  Cancer just doesn't stand a chance with us.  Stupid cancer.

PS - Check out the shirt I found and treated myself to when I got my first back-to-work paycheck.  It was just too good to resist: 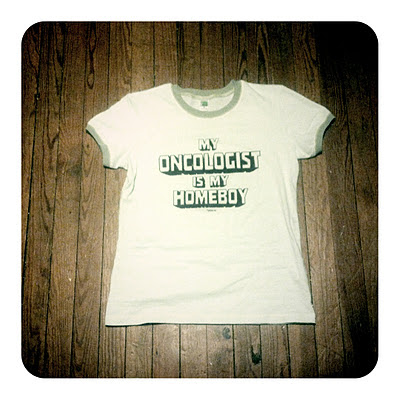 Mum said…
We're a team ... a team of positive spirits and love, and we have way too many plans for the future to let this Stupid Cancer stuff get in our way! Phoebe, you said the perfect words, as always. Thank you for your support! You make such a difference for so many people. It's a joy to be on this journey of life with both of you. I love you Gary and Phoebe!
Mum of Phoebe / Wife of Knitting Dad
January 31, 2012 at 9:48 PM

jim nelson said…
Knitting Dad....yore in my prayers, and what goes around comes around. The love and support you have given Phoebe, not just recently but in her lifetime, will come back to you tenfold! I love you and know that you, too,will beat this fucking cancer!...tatdad
February 1, 2012 at 8:25 AM

Gary/Dad said…
Well said Phoebe, Nan and Jim. Today I am very positive about the lip outcome. Thanks for your love and support. You truly are making a difference for me right now!
February 1, 2012 at 9:59 AM

Jennie said…
I'm keeping knitting Dad in my thoughts. I'll knit a couple more rows on my daughter's baby blanket (she's six, so I'm a bit behind.....)and put a prayer for you in every one. Phoebe, I label you indomitable. Impossible to subdue. Keep up the incredible self-care. Much love!
February 1, 2012 at 10:04 AM

By phoebe marie - April 04, 2012
When my looked down at my ringing phone this afternoon and saw "Moll Pavillion / Fairview Hospital" on the called ID, I just assumed it was one of those recorded messages reminding me about my appointment tomorrow.  (Never mind that I got that message yesterday.  I was buys and not thinking about that stuff...)  So when the voice on the other end was the Nurse Practitioner who was with me from day one of this ordeal, my heart immediately leaped into my throat.  She was the one who told me that the results of my biopsy were that I had cancer.  So it was only appropriate that she was the one to call me first today... She said that when she saw my results from yesterday's can pop up on her system, she could not wait until tomorrow to call and tell me the good news.  What they saw was exactly what they wanted to see:  no progression of disease, and no residual evidence of the tumor.  I was so in shock.  So stunned.  I spent all this time mentally preparing for this news to
Read more

This is really happening, isn't it?

By phoebe marie - December 10, 2011
When I first started this blog, I said something about feeling like this wasn't even happening to me.  I began this journey detached, not to mention completely unaware of what I was in for.  Well, at this point, there is no denying that this is 100% happening to me.  For the last two nights, I haven't even been able to separate from it all enough to just... sleep.  Every bit of "that area" feels like it is either on fire or just, like, disintegrating.  Literally.  My skin seems to just be falling off.  The blisters I've written about look almost gray in color.  At yesterday's appointment, the nurse examined me and decided that what it may be, rather than blisters, is a yeast infection.  Not in the traditional location, but just there in the folds of my skin.  Gross.  So, now I've added Monistat to the list of seemingly useless goops that I am smearing around my groin, none of which have helped in the slightest.  I also finally relented, yesterday, to accep
Read more

So, let me tell you WHY I received this photo from knitting dad today: That's my mum. That's two glasses of champagne. And I received this at around noon their time. So why were my parents, who barely drink at all, swigging champagne for lunch today? Because of the news I got at today's follow-up appointment with my brachytherapy oncologist, Dr. Fleming. As I laid on the exam table, feet in the stirrups, he looked in there and announced "What a beautiful cervix." The nurse nodded in agreement. It was such an odd exchange, it took me a minute to register what they were saying... See, when Ryan booked this appointment for me last month (on the day of my final brachy) he asked them if they would be able to tell by today if the tumor was gone. And the answer was NO - that what they would see would be a necrotic, dying, sloughing away tumor. So really, we went in there today with no real expectations. So, when I finally wrapped my head around
Read more