Warned the Doctor was running late: 9:02am

Notable things about self today:  Still with the friggin cold symptoms.  Ugh.

Time Treatment Actually Began:  About 9:30am

TV situation:  Today she showed me the list of TV & radio stations available for me.  Sadly, it appears that HGTV is the least of all the evils.  And I forgot (again) to bring a DVD to try.

Things happening on HGTV today:  Marathon of a show called "Extreme Homes".  Each hour long episode features 10 completely amazing houses from all around the world.  This show, I have to say, did not suck.  It probably would have sucked even less if I could really SEE the amazing homes.  The two-and-a-half episodes I heard and made squinty eyes at were pretty cool, overall.  A few of the home owners even seemed like they were NOT total asshats.

Favorite feature of any of the "extreme" homes:  Showers with no roof.  Of which there were THREE.  Obviously, this is not a feature that will work in a city like Cleveland, so it's not like I liked it because I'm collecting ideas I plan to implement - it was just cool.

Things I thought about not relating to extreme homes: I made a decision while driving in today.  I'm going to start writing this as a book.  Starting with realizing I was sick, 10+ months pre-diagnosis.   I have no idea how to write a book, but I figure I have a lot of blog material to use as notes and I don't completely suck with the words... so we'll see.  But that's pretty much all I thought about.  I wrote and re-wrote the first paragraph in my head about 57 times.

Most difficult moment:  Noticing that a goopy looking smear on the inside of the tube that first caught my eye on Tuesday was still there today.  I became so fixated on it that I wrapped my thumb in the blanket and scratched at it with my shrouded thumb-nail until I got ALMOST all of it off.

Blood Pressure After:  She didn't say it out loud.

Reason for delay:  Turning onto West 25th Street out of the Lutheran Hospital parking lot RIGHT as the entire city of Cleveland goes on their lunch break was a goddamned nightmare.  It took me close to 20 minutes to get the 3-ish blocks to the Westside Market.  Pffft.  Must remember to go a different way next Friday when appointment time is later. 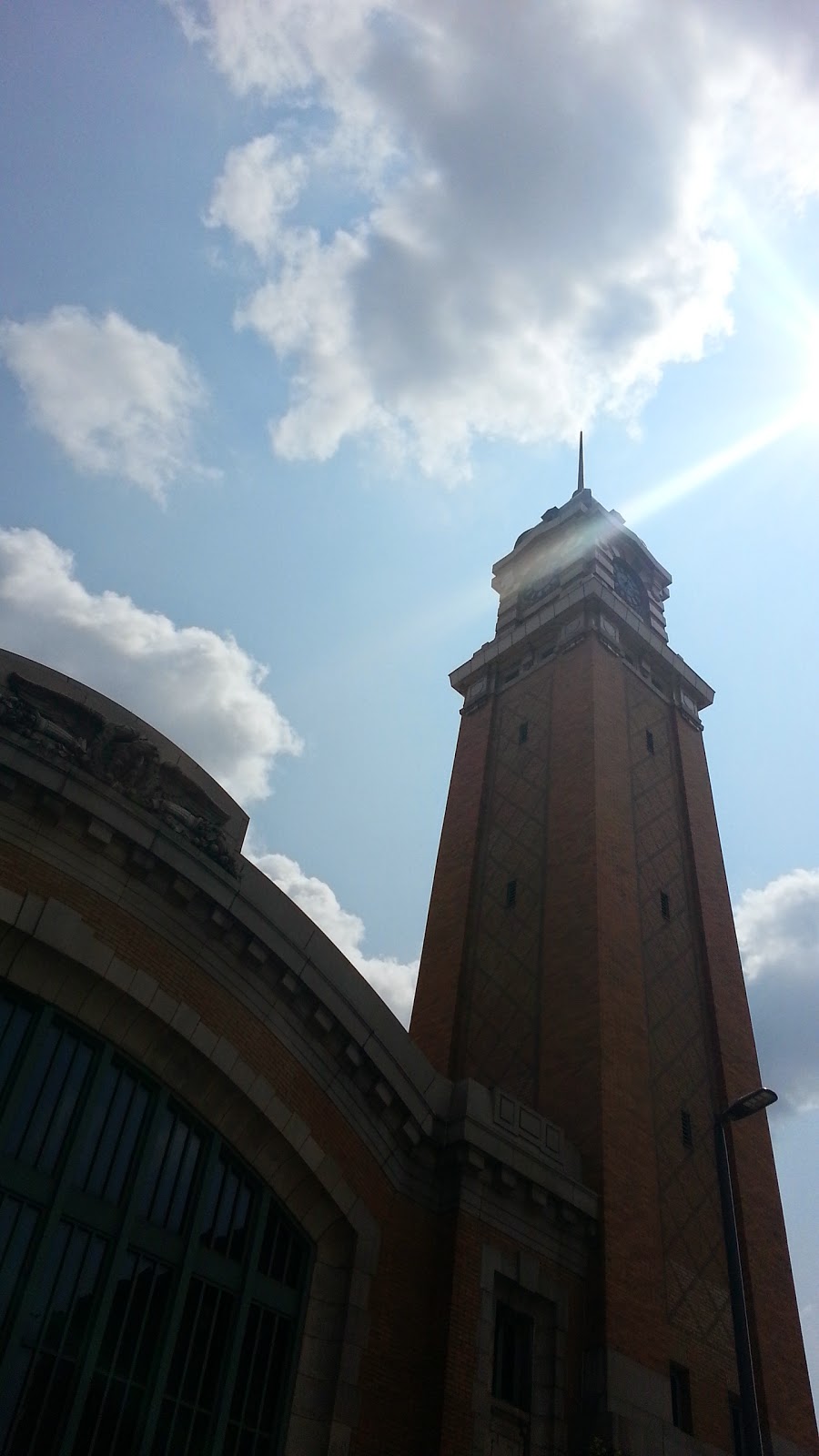 Number of times I had to pee between end of treatment yesterday and leaving for the treatment this morning:  7 (Same as yesterday, which seemed low.  Interesting.)

Pre-HBOT Physical Stuff:  Because I did not give a detailed physical summary prior to starting, I will try to do that here, to give a sort of broad sense of the whole thing...
Since my last bladder surgery:
-  I have definitely had LESS overall pain and discomfort, but have still be unable to do my mini-trampoline workout that I enjoy in the mornings, have been too nervous to ride my bike, and was frankly relieved that there were too many bugs at Tinker's Creek when Ryan and I tried to go for a hike last weekend, because what I was really thinking was "I know this will make me pee my pants but I don't want to bum him out."  (Luckily we were completely swarmed by a massive bug party and Ryan was the one who chose to abort.)
- I was still having noticeable pain whenever the car would hit a pothole or whenever I would forget to avoid the brick road block at the end of my street.
- I would have significant moments of "stop what I'm doing (even if it's just sitting in a chair)" pain anywhere between once and 4 or 5 times a day which could last from 30 second to 3 hours.
- Whenever I go to the bathroom to pee, when I'm "done" I have to sit on the toilet and wait... because if I stand up immediately, I will, without exception, pee AGAIN on myself, my pants, the seat, whatever happens to be there.  But if I sit and wait, maybe a minute or two later, I will pee again.  (For the purposes of pee-logging, as above, these double-pee visits are only logged as a single pee.)
- I leak, just slightly, all day - more if I do anything strenuous (this could mean anything from trying to work out to going up and down the stairs twice in a row because I forgot something) - so I am forced to wear a pantyliner every day.  (Thankfully it is not bad enough that I need a pad or some sort of Depends or Poise or something more embarrassing... not that peeing yourself - even just a smidge - on the daily is NOT embarrassing, but you know what I mean.)
- I generally have to go at least 10 times a day, with 1-3 of those times waking me up in the night.

- (I have chosen to leave out discussion about my bowels - not because there aren't any issues, but because the worst part - the part that drove me to seek this treatment - was the bladder and the Radiation Cystitis diagnosis.)

End of Week One Physical Summary:
- I am still too afraid to try to do any of the more physical stuff I used to do.  This is mostly because after the FIRST bladder surgery, when I thought I was healing and started back to my regular workouts and such, is when things started going downhill again.
- I purposely drove over the brick road on my way home tonight, knowing that I was planning to write this and wanted to pay specific attention to how it felt.  Answer?  Still hurts.  Boo.
- I have actually only noticed ONE "stop what I'm doing" pain since Wednesday.
- Still mostly have double-pee bathroom visits, though once yesterday evening, I was in a hurry and DID get right up, and it was definitely more of a "drip" than a "stream".
- Today I FORGOT my pantyliner - and you guys!  My drawers are still dry and it's after 10 pm!!!  AND I went grocery shopping (i.e. WALKING AROUND) earlier!
- The past two days, as I have noted, I've only had to pee 7 times a day.  And I have not had the need to do so wake me from sleep the past TWO NIGHTS!  Not at all!  And I go to bed kinda early!

End of Week One Overall Feeling:  Good.  I think this is a really good thing.  While there are no SUPER noticeable differences, things definitely seem to be slightly less sucktastic.  Which is pretty fucking awesome.

If I can figure out how to kick this cold this weekend, I have a feeling next week will be even better.

You might not see me til Monday, so don't forget about me...

By phoebe marie - April 04, 2012
When my looked down at my ringing phone this afternoon and saw "Moll Pavillion / Fairview Hospital" on the called ID, I just assumed it was one of those recorded messages reminding me about my appointment tomorrow.  (Never mind that I got that message yesterday.  I was buys and not thinking about that stuff...)  So when the voice on the other end was the Nurse Practitioner who was with me from day one of this ordeal, my heart immediately leaped into my throat.  She was the one who told me that the results of my biopsy were that I had cancer.  So it was only appropriate that she was the one to call me first today... She said that when she saw my results from yesterday's can pop up on her system, she could not wait until tomorrow to call and tell me the good news.  What they saw was exactly what they wanted to see:  no progression of disease, and no residual evidence of the tumor.  I was so in shock.  So stunned.  I spent all this time mentally preparing for this news to
Read more

This is really happening, isn't it?

By phoebe marie - December 10, 2011
When I first started this blog, I said something about feeling like this wasn't even happening to me.  I began this journey detached, not to mention completely unaware of what I was in for.  Well, at this point, there is no denying that this is 100% happening to me.  For the last two nights, I haven't even been able to separate from it all enough to just... sleep.  Every bit of "that area" feels like it is either on fire or just, like, disintegrating.  Literally.  My skin seems to just be falling off.  The blisters I've written about look almost gray in color.  At yesterday's appointment, the nurse examined me and decided that what it may be, rather than blisters, is a yeast infection.  Not in the traditional location, but just there in the folds of my skin.  Gross.  So, now I've added Monistat to the list of seemingly useless goops that I am smearing around my groin, none of which have helped in the slightest.  I also finally relented, yesterday, to accep
Read more

So, let me tell you WHY I received this photo from knitting dad today: That's my mum. That's two glasses of champagne. And I received this at around noon their time. So why were my parents, who barely drink at all, swigging champagne for lunch today? Because of the news I got at today's follow-up appointment with my brachytherapy oncologist, Dr. Fleming. As I laid on the exam table, feet in the stirrups, he looked in there and announced "What a beautiful cervix." The nurse nodded in agreement. It was such an odd exchange, it took me a minute to register what they were saying... See, when Ryan booked this appointment for me last month (on the day of my final brachy) he asked them if they would be able to tell by today if the tumor was gone. And the answer was NO - that what they would see would be a necrotic, dying, sloughing away tumor. So really, we went in there today with no real expectations. So, when I finally wrapped my head around
Read more