By phoebe marie - February 01, 2012
Early on in my cancer battle, I got a small package in the mail from my friend, Kristin.  First off, the package was filled with dozens of hearts - cut out by hand from magazines.  They (of course) went everywhere when I opened it.  Which I loved.  I saved them all and because I thought they were so wonderful, I hung them all over the walls in my art room around one of my desks there.  The one that I surrounded with lovely art and gifts from beautiful friends and family: 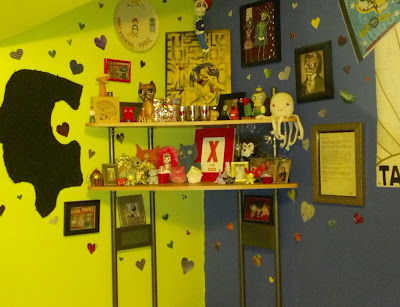 Also inside the package was a little organza bag with three bracelets in it, all the same.  Just simple black elastics with little silver tubes on them that said : posi+ivi+y on them.  There was also a small card in the bag that explained that you should keep one bracelet and share the other two with people who need some positivity!  I immediately gave one to my mum, and a few days later the other went to my friend, Mallorie.  I loved the idea of giving this positive gift to someone and having them share it as well.  One of my favorite things about receiving this gift of positivity from Kristin is that she received HER positivity bracelet as a gift - and the person that gave it to her received HERS as a gift... from someone that I am friends with, too - my friend, Skott, who is one of the most positive people I've ever met!  How cool is that little circle of positivity?

Anyhow, on the backs of these bracelets is a web address (shareyourpositivity.org).  The website is working toward collecting half a million positive posts.  They have just over 1200 right now.  A couple days ago, I sent mine in.  Today, I received an email from a woman at the company that makes the posi+ivi+y bracelets, Alexa's Angels.  She told me that they a) posted a special little bit of love in my honor on their facebook page: 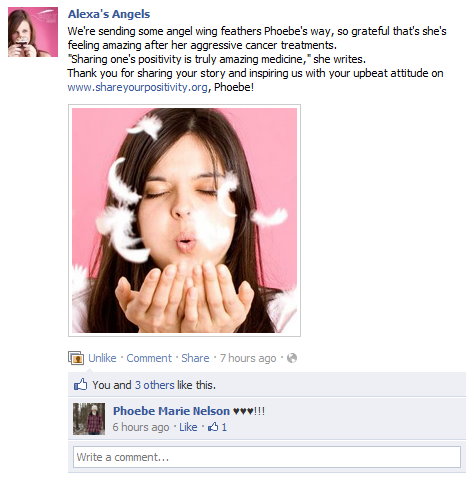 and b) that Alexa's Angels wanted to send me a little gift because they are inspired by my spirit and asked for my address!  I was just blown away!  I mean, talk about full circle.  It really does go to show that you just never know whose life you are going to touch - it may just be the life of someone who has touched yours!

Funny thing is, I JUST placed an order of posi+ivi+y bracelets to give to a friend, and some more for me as well.  The one Kristin sent me, I never took off from the day I got it.  I wore it in the shower, to bed, to work, to my treatments, everywhere.  Yesterday, I looked down and realized it was gone.  It WAS getting looser as it got more beat up from wear, but I have no idea where it left me.  Hopefully someplace where it will be found by someone who needs a little positivity of their own!

PS -  I feel better having posted this after this morning's rant about Susan G. Komen Foundation.  Balance out the anger with some love!