One Wedding and a Funeral

By phoebe marie - July 02, 2012
Saturday was Brother Ed's memorial service.  Ryan and I got up, got dressed, swung through Dunkin Donuts and headed to Fairview Park to pay our respects.  Like I said before, Ed was really just an acquaintance to me.  We met maybe a dozen times over the 10 years I've been back in Cleveland.  Ryan probably knew him a little better - from his old video shop, the music scene, the car scene... all of that.  Still, though, it was important to us to go.  Strange and sad and surreal.  But important.  Ryan got his '71 Challenger out for the occasion.  Which, if you know Ryan at all, proves how important it was.


As we pulled up, we ran into my good friend, Lacey on her way out.  We chatted for a minute and then made our way inside.  I have never seen so many people at a funeral in my life.  (And I've been to more than I'd like to remember.)  We meandered through the crowd and got in the line, which Lacey had warned us didn't go anywhere, but would take us past good stuff to look at. 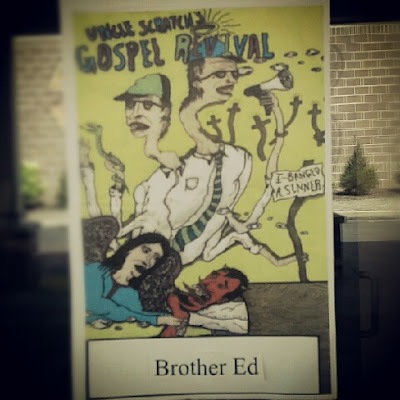 The first person we spied inside was Rocko.  One of our best friends who drove up from Pittsburgh to be there.  From the moment he came and joined us in the line, it was nothing but face after face of people we knew.  People we loved.  All so sad.  Brendan, one of the very first people I met here in Cleveland, came up to say hello.  I asked how he was and he mumbled that four funerals in a month is too many.  My heart broke a little.  As the line progressed forward, we did, as Lacey said we would, get to see some cool stuff.  Photos and doo-dads from Ed's life.  From his luchador mask to his Pirates ball cap and his empty Ray-Bans folded neatly on a table next to his wedding photo... it was all beautiful and heart wrenching.  And then, as the people in front of us dispersed a little, my heart caught in my throat as Ed's gear gear from Uncle Scratch's Gospel Revival (the band that is the reason I knew him) hung from a stand... empty.  Right as we walked up to it (I accidentally typed "him" just now without realizing it.. "right as we walked up to HIM..."), Brother Ant, the other half of Uncle Scratch, was standing there.  We embraced and he started talking about digging the gear out and how hard it was.  I can't even imagine.  It really had to be like losing a literal brother for Ant.  Fucking cancer. 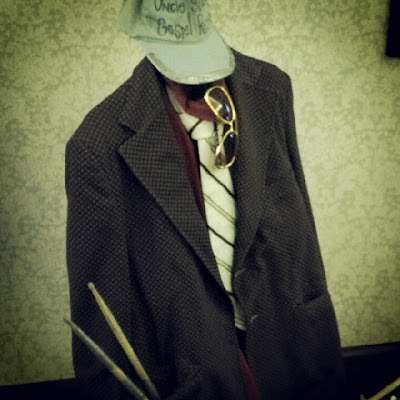 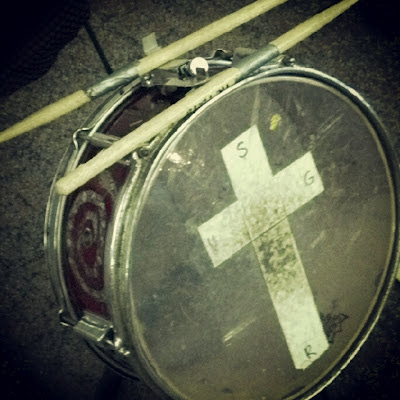 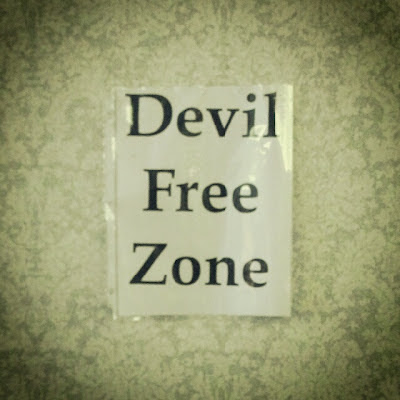 We stayed quite a bit longer than we had planned.  Ryan talked for a long time to the brother of another of the Rumblers Car Club guys who passed away about a week earlier.  Offered to help the brother left behind help finish his brother's car.  Ryan is amazing.  I love that guy.  I talked to dozens of friends.  Almost everyone there was someone I knew or at least recognized.  I kept, rather inappropriately, thinking of a line in the movie "Clerks" where Randall finds out about the funeral of a girl fro their high school and insists on closing the shops so they can go because it was going to be "the social event of the season".  Sort of demented, but it was, in a strange way, a beautiful gathering of friends.

Through all of the tears and sadness, something else happened too.  It was strange and I feel almost ass-y saying it, but I have to.  People, our friends, Ed's friends, were happy to see me.  Happy to see, perhaps, that not everyone loses their fight to the dirty whore that is cancer.  Happy to see me looking healthy.  For a lot of people that we don't see regularly, it was the first time they had seen me at all since my diagnosis, let alone since treatment ended and all that.  It felt good in a way to be something happy and positive for folks to focus on, if only for a moment.

After many hugs, a few tears, and picking up one of the last two Uncle Scratch's Gospel Revival t-shirts in existence (all funerals should have merch, I've decided), we headed back home and went about standard weekend nonsense.  Cleaning.  Errands.  Etc.  And then a few hours later, we got dressed back up, in somewhat less somber attire, and headed to the Sachsenheim for our pals Erin and Josh's wedding reception.

The reception was fun.  Tacos.  Cupcakes.  Friends.  So wonderful to see more people we just don't see enough.  Again, the amazement at my healthy appearance continued.  It was so good to see everyone and to have a little fun!  Ryan even got dressed up for the occasion: 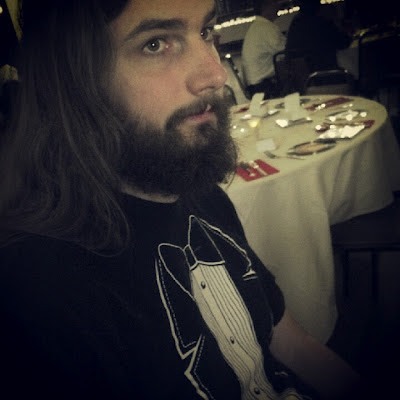 After a while, the heat was getting to my menopausal ass and we had to slink out a little earlier than planned. But it was an incredible day, all around.  I am so grateful for the people who have come into my life since I landed back in Cleveland a decade ago.  Never in all my travels have I met people like the people here.  I have lived many places and have always made a few really incredible friends everywhere I've been.  The kind who stick with you for a lifetime.  But the people from this town... EVERYONE is someone whom, if I ever left here, I would keep in touch with forever.  Because every single one of them is absolutely amazing.

I feel so lucky to be alive.  To be healthy.  To be happy and to know, to believe 100%, that nothing but good is coming in my life.

Oh... and my mum keeps saying that I talk about how much healthier I am looking and all of the weight I lost and all that, but I haven't really posted any photos.  I wanted to find a "before" shot, but I felt so terrible and so fat and ugly for so long that there really aren't many pictures that would qualify as a before.  But here, from the wedding reception, is an "after".  Or maybe even just a "right now" - as I plan on looking even better soon. 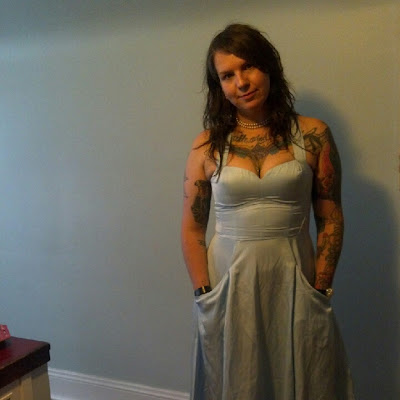 Lots of love to everyone in my life,
Xxo, Phoebe
cleveland death friends life love

Anonymous said…
God, Phoebe, if you ever look better than you do right now, we won't be able to stand it. You look fucking incredible, as always.
July 2, 2012 at 12:52 PM