By phoebe marie - February 04, 2013
Last Wednesday, I was having a rough time.  I posted a pretty miserable post here, which I have since deleted (so if you saw it and then didn't see it, you're not going crazy).  I just did not want to let the things that were getting me down turn me into that negative, hateful person again.  I didn't like the reaction I had to the situation and so I did what I needed to do to resolve it.

I took Thursday off work.  I've heard people say "Mental Health Day" before, but I had never actually experienced one before last week.  Can I just say that if you have the ability to do this when things are screwy in your own brain, I highly recommend it.

I started out by visiting my friend, Jess and her daughter, Harper on Thursday morning.  We had breakfast and caught up and then Jess touched up the teal streaks in my hair and gave me a little trim.  So I started my day getting prettied up AND enjoying some friend time with Jess and adorable baby time with Harper. 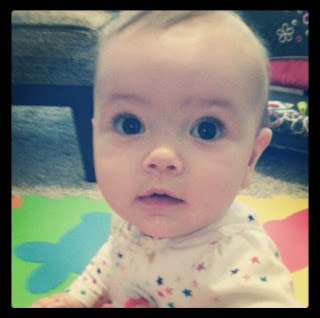 When I left there, I was in SUCH a better mood.  I decided to call my Mum.  Lately, I feel like we've only talked when there was some sort of catastrophe going on.  I wanted to talk to her while I was just HAPPY.  We chatted for a long time - during my drive, while stopping at Target to run an errand, and finally as I got home.  And the best part of that was that, when I GOT home, there was an envelope from Cleveland Clinic waiting for me in the mailbox.  My PAP test results.  I knew it had to be good, or they would have called, but I was nervous tearing into it anyhow and glad that Mum was "there" to share it with me!  And, as you already know, the results were normal - giving me an official YEAR cancer-free!!!  So happy. 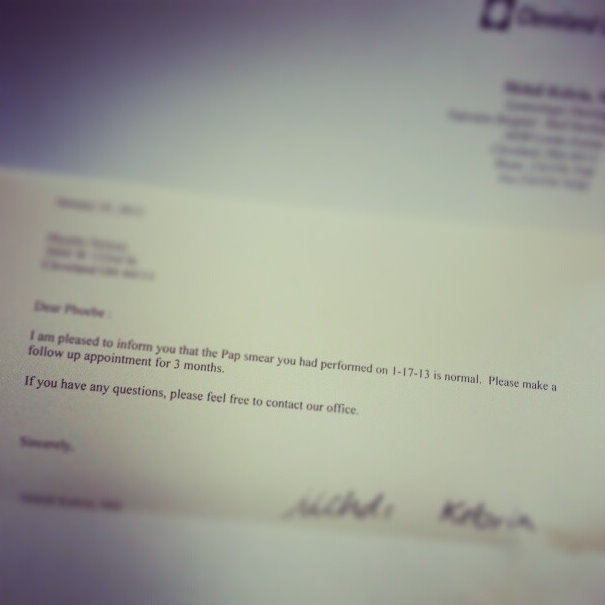 While I was getting great news, however, my pal Spencer had gotten some pretty crummy results from his last blood draw.  I don't fully understand the ins and outs of it all, but what I do know is that the abnormal gunk in his blood keeps going up.  And it's hit the point where it's basically a few percent away from being definitive Leukemia.  Suck. Well, there are certain times in life when the best thing you can do is... eat chocolate.  Sooo, I whipped up some of the best brownies ever and headed down to the 'burbs to deliver them to Spencer's mom, a.k.a. my "wife", Lacey.  We hung out for a few hours, chowing on Ghirardelli brownies and shooting the shit.  I can't be positive, but I am PRETTY sure the brownies made her feel better - at least a LITTLE.  You know - as much "better" as one can feel when going through the emotions (or "chemotions" as she has nicknamed them) that a mother knowing her baby may have to go through chemotherapy can.  I love that girl.  I love her sons.  It's so hard to imagine being in her position.  But what I know is this - she is pretty much the toughest broad I know.  And if anyone can get through this and still keep kicking ass in Nursing School, it's Lacey.  She's my dude.

When I got home, Ryan took me out to dinner at The Buckeye Beer Engine, one of our favorite restaurants, to celebrate the good news.  Two delicious burger, two sides of sweet potato fries and two tasty beverages later and we rolled ourselves home for a final celebratory visit with our pal, Dan, before crashing out.

It was the perfect Mental Health Day, to say the least.  I woke up on Friday feeling refreshed, recharged, and ready to take on ANYTHING.

Hope this feeling lasts.  I've got my fingers crossed about SO MANY things right now, I can't even tell you how filled with HOPE I am.  It's a good feeling.  If not a little nerve wracking.

Staying positive, though.  Hope you all are, too.
Lots of love,
Phoebe
friends leukemia mental health spencer

Sharky Marie P.G. said…
The brownies definitely helped but just hanging out with you helped more. And thanks for going out on Saturday. I needed it. And thanks in advance for being my birthday date.
February 4, 2013 at 8:29 AM

Anonymous said…
you cheered up my day, it was awesome hanging out and the pic of little beeps is adorable! your positivity spreads and I'm glad you took your mental health day :)

Mum said…
How awesome that you can not only create a fabulous day and attitude adjustment, but you can also go back and just DELETE the bad stuff. *POOF* - gone!

Thanks for the HAPPY PHOEBE call, For me, EVERY call from you is a happy one. I was extra happy to be there with you for the opening of the letter declaring you "1 year cancer free".