By phoebe marie - September 25, 2012
My apologies for the two day pause in the story there.  Yesterday was a very full day - but I will get to THAT later.  Seems I am forever a few days behind in my catching up with things here in blog-land.

So.  Back to the retreat.  I started Saturday morning out with a couple cups of coffee and then one of the women from The Gathering Place led us in a simple, easy yoga flow.  It's been a while since I have been able to make it to my regular Wednesday yoga class with my friend Laura, and I definitely enjoyed doing it again - and missed Laura even more.  Perhaps I will get myself there tomorrow.  After yoga, it was off to the Countryside Farmers' Market at Howe Meadow.  This was just incredible.  Best farmers' market I have ever been to.  I left with two pounds of raw honey (Ryan and I are going to make mead), cherry and grape tomatoes, beets, raw milk beer cheese, various peppers, empire apples (I know my mum will like that!), a pound of ground buffalo, and A BUFFALO JAW BONE!  (That last item is not for eating - just for looking awesome on my mantle.)  We also stopped at Szalay's Farm Market where I added a loaf of pretzel bread, a bag of sweet potato chips, some peaches and some spinach to my hoard.  So much yumminess!

When we got back to Stanford House, we made lunch and then headed out for our hike to Brandywine Falls.  It was about a mile and a half hike one way to the falls.  I ended up lagging behind the group pretty often because I was taking pictures of everything for a while.  It ended up working out nicely, though, because it gave me the opportunity to walk with and support one of the girls - a two time thyroid cancer survivor - who, despite having gained a lot of weight, lost a lot of her balance, having asthma, AND having forgotten her inhaler, was determined to go on this hike.  She impressed the shit out of me and I did my best to help her up the hills - and then she did HER best to help ME and my bunk-knee-no-ACL-havin' ass down the hills.  She shared a lot of what she went through, having had her second fight with her cancer during what should have been her last year of high school.  I can't even imagine... 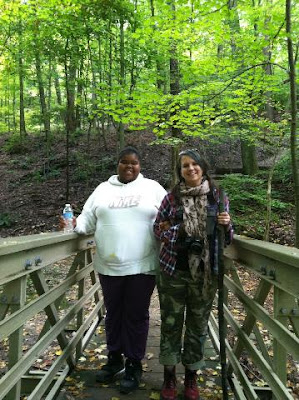 When we got to the falls, the group leaders had us do an exercise where we took a rock (or several), and sort of symbolically "put into them" the things we felt might be holding us back - the things we wanted to let go of.  Saturday was the Autumnal Equinox.  A time of balance.  Of letting go of the old and being open to the new.  Stuff like this normally seems a little silly to me, but I held my stone to my head and to my heart and I thought some thoughts into it and I hucked it into the falls with all my mite. 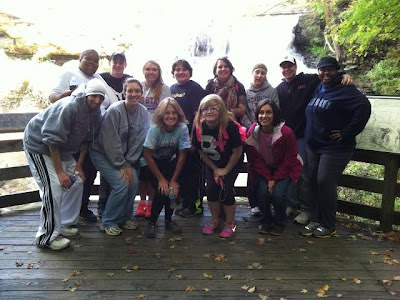 Only four of us made the walk back.  Because several of the people in the group were not able to do the hike once, let alone twice, more than half the group had come to the falls in cars.  The four of us that walked back took a different route - down Stanford Road instead of back through the woods.  It was nice to see some different scenery and we managed to make it back to the house pretty much right as it began to rain.

We did a couple more group activities at the house.  One was sharing, if we wanted to, what it was we "threw away" into the falls.  I am normally into sharing, but I did not raise my hand this time.  You know why?  Because I COULD NOT REMEMBER what it was I had thought about letting go of.  When I told my mum this, she said that I must have REALLY let it go, then.  Very funny, but I am going to put this one down to chemo brain.  Something I learned, this weekend, will likely not be going away any time soon.  Boo.

After making pizzas with a bunch of the goods we got at the farmers' markets, we made collages.  I know that in these sort of group therapy situations, a collage is a much different animal than what it is to me.  Not that there is anything whatsoever "wrong" with gluing positive words to a page as a healing exercise.  I think it's lovely.  But to me - collage is a different thing.  It is art.  It is MY art.  So that's what I did.  I made an art piece.

Next on the schedule was the drum circle.  I took it upon myself to go directly to my room before anyone even had the opportunity to ASK me to participate.  I am feeling a lot more open to a lot more things these days... but drumming?  Yeah - that's still a big fat "HELL NO" for me.  It would have been just as "fake" for me to participate in a drum circle as it would be for me to go to church.  So yeah.  Instead I hid in my room, drinking my illegal whiskey (no booze is allowed in national parks) out of my flask, listening to Andrew W.K., and reading my Whole Living magazine.  About halfway through the drumming thing, one of the dudes came up and hung out with me.  He was a leukemia survivor and we had a really cool conversation about religion, tattoos, stem cell transplants, and tributes.  It was pretty awesome.

And then, because we were rained out AGAIN, we all said screw it and made s'mores on the stove.

With no more secret doors to investigate, I hung out with the same group from the night before and just laughed and talked about all sorts of nonsense.  It was really cool because the conversation included everyone's everyday life stuff as well as their everyday cancer stuff.  Like I said before - people I'd want to hang out with even if we didn't have cancer in common... but it was so amazing that we DID have that in common.  It was something I really needed - being around people close to my age who still knew what "chemo brain" was, who still had fears of relapses, who could truly understand this new part of me that I barely even understand yet.

I went to sleep feeling very grateful for every single person I met there and every single experience I had.  (Even hiding from the drum circle.)

In the morning, we made breakfast together, did one more little exercise, and then packed up and headed out.  I drove home with the top down and made it almost all the way back before having to pull over because it was pouring down rain.  And even THAT... was awesome.

Later that night, Ryan and I had dinner with some friends - and learned that a guy we know who is barely into his 40s, is in the hospital with stomach cancer that has spread.  Like, to a lot of places.  Ryan went to visit him in the hospital today and he's in good spirits and is hopeful.  Keep him in your thoughts and prayers if you're so inclined.  His name is PJ and he's one of those people who is just, like, genuinely nice and a good guy.

Is it me, or is this cancer shit just fucking everywhere these days?  I wish I could say I thought it's just that I am hyper-sensitive to it now... but I really do think it's gotten so much more common.  It's scary.  And sad.  And infuriating.

But let's end on a positive note for today.  I had a fantastic weekend.  I am planning to get more involved in things at The Gathering Place.  I made some great new pals, one of whom I've already at least texted with briefly every day.  I'm so glad I went.

And in case any of you guys actually came here after I gave you my card... thank you.  Thank you all.  I am really glad to know you all now and look forward to seeing you again.

Mum said…
Awesome collage! It sounded like the perfect weekend with the perfect circle of new friends and fellow survivors. And now I know what to give you for Christmas: pah rum pah pum pum ... ha ha ha!
Mum
September 26, 2012 at 7:43 AM