By phoebe marie - October 01, 2013
Well, all my anesthesia fears were for naught, not that I didn't know that on some level going into it all yesterday.  In retrospect, I'm pretty sure the worst part of the anesthesia bit is the vague memory of attempting to make some sort of idiotic joke about how much crap was in the OR when they wheeled me in there, clearly on my way to loopy-town but not quite knocked fully out yet.  When seemed like a just a moment later, I woke up in recovery.  And because Todd and Lacey had fully prepared me for this part, I was unshaken by the fact that I was randomly crying for no reason.
I was in a lot of pain, and the nurse gave me Morphine, which did nothing, then Demerol, which made me sleep for an unknown amount of time, and then Morphine again.  Eventually I was rolled into a little discharge room and they brought Ryan and my mum in to see me.  I'm almost glad I was still a little woozy because being fully aware while the nurse explained to me AND RYAN how to empty and change the sweet wee-bag that was strapped to my leg would have sucked.  (I feel terrible for Ryan through all this shit.  I know he's there for me no matter what, but I can't help the thoughts that he didn't sign up for this garbage when he married me. In sickness and in health sounds good on paper, but he really got way more sickness so far than health.  Poor guy.)
But anyhow.  Yeah.  You read that right.  I have been sent home with a catheter that drains into a bag strapped to my leg.  All those times I wished I was a boy so I could pee standing up? Yeah. I take those back.  Every last one of them.  This sucks.  And it's just embarrassing.  Of course, vertical urination when one has a penis is probably was more pleasant than peeing out of a spout by your knee... But still.  I long to sit on the toilet again in a way I never imagined I would!
When we found out they didn't have to keep me overnight at the hospital, my mum asked if I could go to work today, and the doctor was like, "I guess, but I can't imagine she'll actually want to."  Well, that's the truth.  It's been bad enough having to walk past all the shop guys ten times a day to empty my bladder. Doing so to empty my pee bag would definitely suck more.  Yikes.
The doctor sent me home with this atrocity for a reason though. He said he did some fairly deep biopsies and felt I would heal better without the pressure in my bladder.  I go back to the cancer center tomorrow to have the catheter removed.  I am literally counting down the hours.  It is horribly uncomfortable, and while the leg bag is weird, the higher capacity night time bag was the absolute pits.  I could not figure out how to hang it from the bedside as directed and I am almost positive that it only collected anything when I would stand up out of discomfort every couple hours all night.
Whizz-catcher notwithstanding though, there's still no way I could have worked today.  I'm still in pain. And plenty of it.  They wrote me a script for Vicodin, which I was certain I would not take because I hate pain killers... And I've already cracked into them a couple times out of utter desperation.  Along with the "deep biopsies" the doctor also did the cauterization procedure he had told me would help with the pain of the Radiation Cystitis.  So my bladder's definitely been through the friggin wringer.  I'm hoping to go back to work tomorrow after getting the catheter removed, but I'm not entirely hopeful that that will actually happen, which sucks.
As for biopsy results - we should hear back on those in the next couple days.  The surgeon was really almost positive that there was no tumor.  That it was all just the Radiation Cystitis.  But knowing for certain is going to make this year's Cancerversary Party even more awesome.  (And yes, there is going to be another one.  Saturday, November 2nd.  During the day at the house and then capped off with a Mother Hawk (that's Ryan's band) show at the Maple Grove in Maple Heights that night.  Details to follow soon, but save the date now if you want!
So that's all I got for now.  But I will leave you with yesterday's Quote of the Day... As I was talking to my brother on the phone last night about all this, I found myself saying, without a lick of shame, "Oh. My knee is hot. I must be peeing."  I have absolutely lost my filter though all of this.  But I suppose I deserve to say whatever I want about all this.  Right?
Xxo, Phoebe 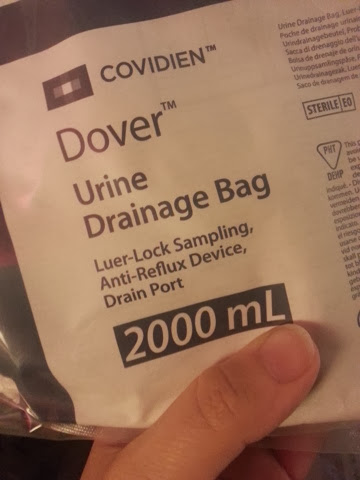 Unknown said…
Just wanted to say hugs. and more hugs. from this part of the net to yours.

Unknown said…
Phoebe, I was checking a few of your posts and had a quick question about your blog. I was hoping you could email me back when you get the chance -emilywalsh688 (at) gmail.com- Thanks : )